Origin of the company name Penthecilia 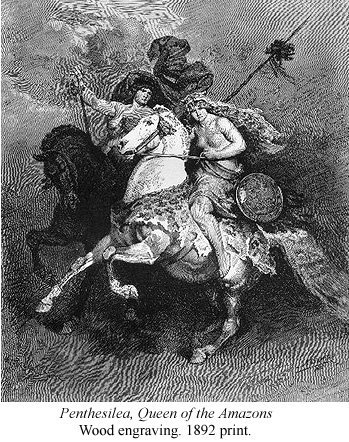 Penthesilea was the queen of the Amazons and the daughter of Ares and Otrere. She was one of the most famous and very strong warior of the Greek myth, especially at the battle field. She fought in the Trojan War so that she would gain glory and heroicism. Her successful battles caught Achilles’ attention, and he slowly worked his way toward her so that he could face the famous Amazon. As he was about to face her, Chalcon of Cyparissus (who had fallen in love with Penthesilea) tried to deter him.

Achilles swiftly killed Chalcon and his battle with Penthesilea soon ensued. Achilles defeated Penthesilea, but when he saw her beauty, he, like Chalcon, fell in love with the brave Amazon and quickly lamented his act.

Penthesilea was a revered warrior in a time when men were dominant. She excelled in a man’s game (war), while at the same time she retained a feminine virtue (beauty).

Achilles, you are amazed.
Why did I let you find
my weakness? I love most
the freedom to act
and the will. Hear the war?
Men and Amazons
cartwheel to earth
scars metal torches
lean out of the mud

Achilles! Before I fell,
the back of your ankle
winked at me within reach.
By my death I don’t know
why I tell you this.